When he was just a boy, the old man heard a story of a woman who found a corked bottle on the beach.

When she pulled the cork from the bottle, she imagined a genie came out. The genie granted the woman all her wishes. The old man spent his life searching for his own bottle with a genie in it. He combed the beaches of every continent. Because of his obsession, he never made lasting relationships or held a job for long. He was an unhappy man.

One day on a beach near his home, he found the bottle he had been looking for. For a reason unknown to him, he felt there was a genie inside. Corks in other bottles were hard to pull out, but this one slipped out easily. Out of nowhere a genie appeared. The genie said to the old man, “I am here to grant you whatever you want.” “Whatever I want?” replied the old man. “Well,” said the genie, “almost anything. Since you are old and have never been in politics, it’s unlikely that you can become President of the United States, nor do I think it wise to wish for a spot on the Olympic basketball team. And I do not think you want anything taken at someone else’s expense. So, no, not everything. Still, more than you have dreamed of. Certainly enough to make you happy and peaceful.” The old man was ecstatic but then he became angry. “Why has it taken me so long to find you? I could have accomplished so much had I found you when I was young.” “Ah, master,” said the genie, “but I have been with you all along. I was not in that bottle. I have been with you and granting your wishes all of your life. Remember when you were six and you wished your father would pay more attention to you? You cut your finger. That was no accident. Your father washed the cut and held you.

Remember? There was the time you took the CPA exam. You kept telling me you were not smart enough to be a CPA and that you were not worthy to make as much money as a CPA. Remember how you froze during the exam? You got your wish.” “Because you were not aware I was granting wishes,” continued his genie, “your wishes often hurt you. Sometimes the wishes were not even yours. They came from parents, teachers, friends, and, yes, often from TV ads.” “I am glad you found me. Now you will make wishes that are thoughtful and good. Now we can work together. Together we can stay healthy, find peace, and enjoy the richness of life. But first, I must give you this book. Read it carefully. If you follow these instructions, I will grant you peace, prosperity, and happiness.” 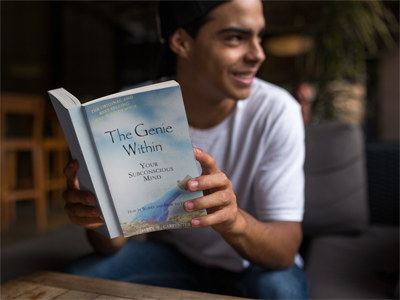